Please note: The Freedom Wall is currently not on view. The panels have been covered for their protection as enhancements are made to the area, including all new lighting, as well as accessibility and walkway improvements.

Watch a documentary about the making of The Freedom Wall

The corner of Michigan Avenue and East Ferry Street in Buffalo is the northern entrance into the Michigan Street African American Heritage Corridor: a nexus of the city’s deeply rooted African American history. It marks the intersection of the honorary Richard Allen and Harriet Tubman Ways, and it is home to Bethel African Methodist Episcopal Church (Bethel AME). Organized in 1831, Bethel AME is Buffalo’s oldest black religious institution and served as a critical station on the Underground Railroad.

The museum's Public Art Initiative, in collaboration with the Michigan Street African-American Heritage Corridor and neighborhood stakeholders, envisioned this mural as a way to celebrate our nation’s historic and ongoing struggles for political and social equality, including the formative and lasting contributions of local leaders to this cause. With support from the Niagara Frontier Transportation Authority (NFTA), the large concrete wall surrounding the NFTA’s Cold Spring Bus Maintenance Depot has been transformed into portraits of twenty-eight notable civil rights leaders from America’s past and present.

The list of subjects was generated from multiple public meetings with community members that yielded hundreds of suggestions, featuring a mix of local and national leaders. The success of this mural stems from those candid and inspiring meetings, and the final work is designed to reflect a broad and boundless conversation. A guidance committee composed of local historians, community activists, and artists, including Karima Amin, Max Anderson, Dr. Cynthia Conides, Hiram Cray, Eva Doyle, and Dr. Henry Taylor helped determine a consensus list. In selecting and ordering the final 28 subjects, the group aimed to shape a unique story about civil and human rights work in American history, with an eye toward contextualizing national work and local impact.

Vital contributions from community meetings also helped determine the team of artists that painted these portraits over the summer of 2017: John Baker (born 1964), Julia Bottoms (born 1988), Chuck Tingley (born 1983), and Edreys Wajed (born 1974). Each artist is a native of Buffalo, currently lives and works in the region, and holds a degree from SUNY Buffalo State.

No group of 28 individuals could ever possibly encompass the national and local history of civil rights. The fight for social and economic justice in the United States is far from over, and the story and the struggle continue. While celebrating the crucial work that has been done, this project is intended to encourage conversations about the full scope of the long journey toward equality and freedom, the work still yet to do, and the actions all of us can take to bring about a most just and equitable world.

The list of subjects depicted is as follows, with each artist alternating panels for a total of seven works each.

John Baker (American, born 1964) is a nationally recognized artist, curator, and educator from Buffalo. Baker is a natural storyteller and focuses his production on images designed to elicit emotional responses intended to inspire viewers to learn more about the subject matter at hand. As an artist, Baker has executed murals, participated in solo and group exhibitions locally and nationally, and has engaged diverse communities in a dedicated and lifelong effort to share the value of cultural production.

Baker is a multi-talented curator and educator, having developed exhibitions with numerous institutions, each time providing unique visitor experiences, supporting dynamic outreach opportunities, and encouraging inquiry-based learning for all audiences. Baker is a long-celebrated activist for artists in the region, often providing young artists with their inaugural opportunities for workshops and exhibitions. His tireless support of other artists' practices has led to his recent advancement as the president of the newly formed Western New York Urban Arts Collective, a group assembled to provide mutual support for representation in the region, especially for underserved artists and artists of color.

Baker displays an unparalleled sensitivity to the impact of art on individuals’ lived experiences and his familiarity with the history of our local communities provides a significant asset for the development and execution of this project.

Julia Bottoms (American, born 1988) is a Buffalo-based artist focused on realistic and recognizable representations, using portraiture to give a glimpse of people of color as sensitive, sincere, and multi-faceted; images that the artist feels are often missing in mainstream portrayals. Bottoms has previously focused on depictions of men in part because she feels a “certain level of expressive privilege often denied to men by our culture,” giving her the freedom to explore and deviate from notions of accepted but deeply flawed racial stereotypes and distorted gender roles. Recently her work has slightly broadened, focusing less on gender specifics as it turns toward aspects of character in general.

Bottoms feels that in a culture that so often markets reductive representations of the beauty, grace, and intellect of people of color that it is necessary to produce and promote nuanced and constructive images that actively break that cycle. Bottoms proudly asserts, “People of color have been trapped in someone else’s narrative for too long, and when we have tried to write our own, we have often been erased from the mainstream’s history books. I believe it is time for us to use the talents we possess to speak our truth. Our lives are worthy of dialogue.”

Bottoms has exhibited regionally, including a recent exhibition of her work at the Buffalo Arts Studio, Tinted: A Visual Statement on Color, Identity, and Representation (April 28–June 2, 2017). Bottoms is the inaugural artist for the Open Buffalo Emerging Artist Series. She is also a contributing writer for AFROPUNK.

Chuck Tingley (American, born 1983) is a Buffalo-based artist primarily focused on figurative representations through drawing and painting. Tingley’s concentration on realistically rendered figures as subject matter is made dynamic and emotional by relying on the expressionistic application of layers of paint and the inclusion of abstract designs hovering amid diaphanous backgrounds. Tingley hopes that his work connects spiritually and psychologically with his viewers in a way that allows them to plumb their own passions and to build unique narratives based on their individual sensations and perceptions.

Tingley’s work has been published in regional publications such as The Public and Spark Magazine. Solo exhibitions of his work have been presented at the Olean Public Library and El Museo Gallery and High-Temp Fabrication in Buffalo. He has also been included in group exhibitions at the Burchfield Penney Art Center and the Erie Art Museum in Erie, Pennsylvania. Tingley has executed numerous public murals in Western New York, including commissions for Artpark in Lewiston, Glow Gallery in Buffalo, and, most recently, Art Alley in Niagara Falls. In 2015 and 2016, he received Decentralization Grants from the New York State Council on the Arts and in 2016 he was honored by Arts Services Initiative of Western New York as a Finalist for the Artist of the Year Spark Cultural Award.

Edreys Wajed (American, born 1974) is an artist, educator, performer, and entrepreneur based in Buffalo. Wajed’s most recent series of drawings consist of black-and-white line-based representations often taking the form of expressive yet minimal portraiture. Initially started as a daily practice to expand his creative output, Wajed has created more than 700 individual works in this series.

Wajed is well known locally as a multi-talented artist expressing his talents through the creation of jewelry, spoken word, music, and educational activities. Wajed has said of his artistic ambition that his “inspiration is to actually BE an inspiration. I want to be an inspiration to others through my thoughts, words and actions.” Wajed’s unyielding positivity and generous spirit result in a visionary practice that is the culmination of committed and sensitive observation of the world. This provides Wajed with purpose larger than himself; one which he shares generously to inspire those around him to “get real for real results.” 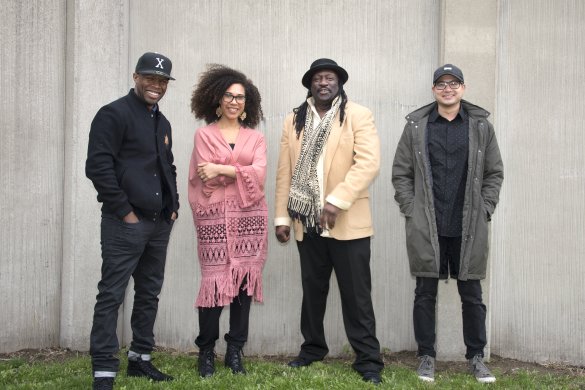 Community Event at The Freedom Wall 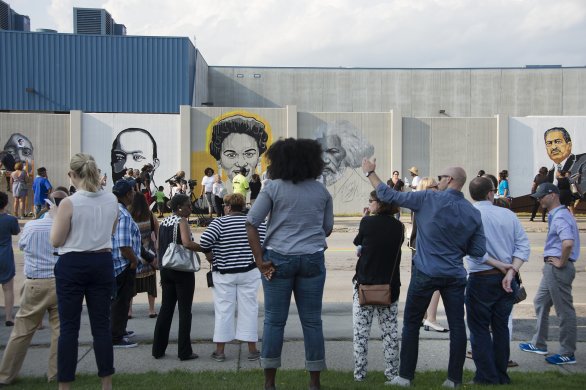 Community Celebration at The Freedom Wall 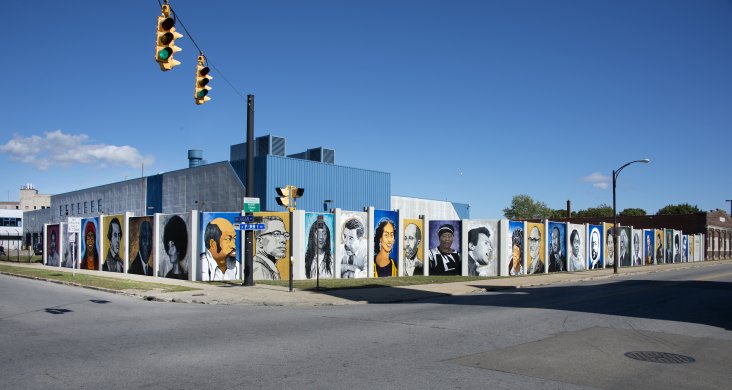 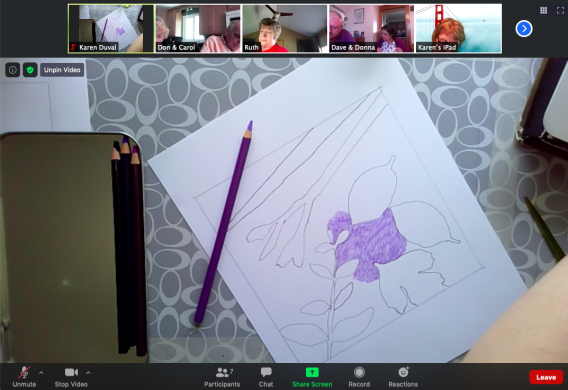 A Space for Dialogue 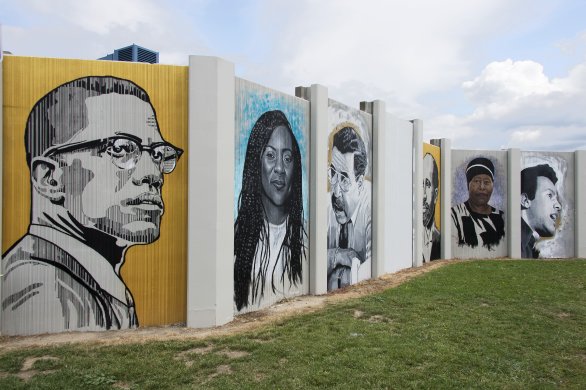 A documentary about the creation of The Freedom Wall