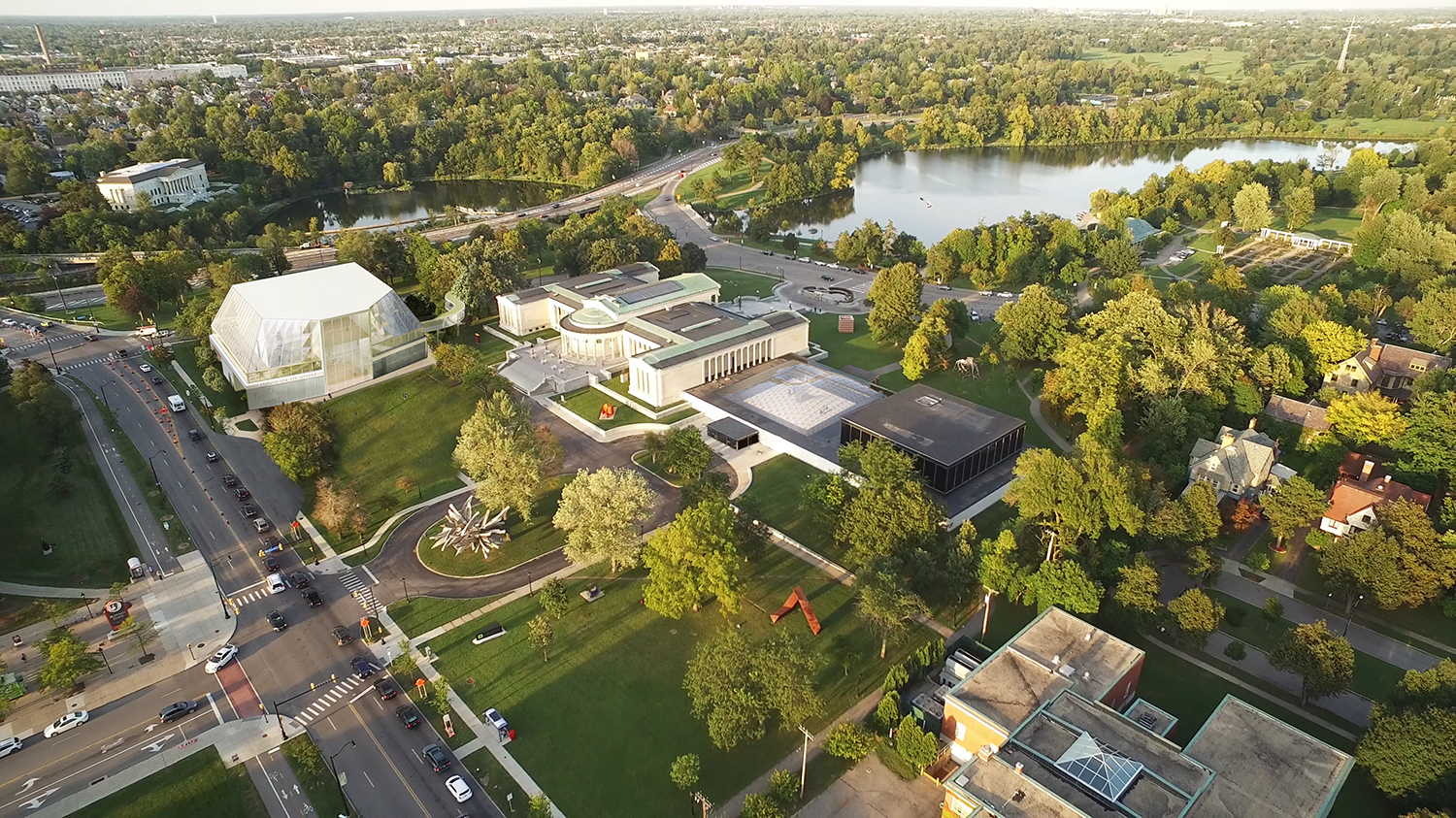 Although the founders of the Buffalo Fine Arts Academy (BFAA) agreed at their first meeting on November 11, 1862, that “Buffalo is to have a permanent Art Gallery at once,” the institution operated in several temporary locations until the turn of the 20th century, when John J. Albright helped establish its current campus and first permanent home.

John J. Albright provided the funds to build a permanent home for the BFAA on the museum’s current site adjacent to Frederick Law Olmsted’s Delaware Park. The Board commissioned architect Edward B. Green to design the building, and groundbreaking occurred in spring 1900. The building was intended to first serve as the Fine Arts Pavilion of the Pan-American Exposition in 1901, but construction was not completed until spring 1905.

The BFAA’s new building, named the Albright Art Gallery in honor of John J. Albright, is dedicated and opened to the public on May 31, 1905. Attendees view the Inaugural Loan Collection of Paintings, featuring 237 works by Jean-Baptiste-Camille Corot, Thomas Gainsborough, Rembrandt van Rijn, James McNeill Whistler, and many others.

In 1927, BFAA Board Member Colonel Charles Clifton donated funds to renovate the abandoned Buffalo Society of Natural Sciences building on Elmwood Avenue for the Albright Art School. The remodeled building was named Clifton Hall in his honor and opened for art classes in 1929.

Seymour H. Knox, Jr., and his mother, Grace Millard Knox, provided the funds to establish an art library for museum staff, the Albright Art School, and the public.

John J. Albright commissioned Augustus Saint-Gaudens to create the Eight Caryatid Figures on the 1905 building. Although they were part of the building’s original architectural design, and were completed by Saint-Gaudens between 1906 and 1907, they were not permanently installed until after funds were secured for their purchase in 1933.

The new wing was added to offer more classroom space for the Albright Art School.

During his 46 years on the BFAA’s Board, Green saw firsthand the need for expansion. He drafted plans calling for two large galleries built on the north and south porticos, and a large addition, the Elmwood Avenue portico, which included an auditorium, two more exhibition galleries, a library, and offices for staff. The addition would have doubled the square footage of the 1905 building. It is unclear why this plan did not move forward.

Due to increased demands from schools and the public, the Education Department moved from a single room in the South Wing of the 1905 building to new quarters on the ground floor, which could be accessed by a separate entrance from Elmwood Avenue.

This second new wing was added to offer yet more classroom space for the Albright Art School.

In the museum’s 1956 Annual Report, Director Gordon M. Smith called attention to the inadequacy of the museum’s current building and the urgent need for renovation and expansion. The BFAA Board established a Building Committee that began to negotiate with architects and contractors.

The BFAA Board unanimously approved architectural plans for an addition drawn by Paul Schweikher, chairman of the School of Architecture at Yale University. The Board also called for a parking plan from the City of Buffalo, which they delivered in October 1957.

“May the spirit of John J. Albright haunt all those who have a hand in this dark deed.”

After the public responded negatively to Paul Schweikher’s proposed addition, the BFAA Board began to explore other possibilities for expansion, including the construction of a separate building.

Early in 1958, Buffalo native Gordon Bunshaft, of Skidmore, Owings & Merrill of New York, was asked to draw up new designs for a separate addition to the Albright Art Gallery.

Improvements Made to 1905 Building Interior

Improvements were made in the areas of climate control, lighting, and storage.

From late summer to early fall 1959, Gordon Bunshaft and three of his associate architects presented new studies on the proposed addition and parking facilities. The BFAA Building Committee and the Parks Commissioner approved final plans in October 1959, and they were shared with the public in 1960.

Groundbreaking for the new building took place on July 6, 1960. In early 1961, the structural shell was completed and work began indoors. Minor changes were made to the front entrance and parking plan in October 1961, and work was completed in late 1961. The addition was funded by $1,400,000 from the Seymour H. Knox Foundation and nearly $500,000 from BFAA Board Members, among other donors.

Plans for the new addition also called for much-needed renovations to the interior and exterior of the 1905 building.

On Friday, January 19, 1962, the museum’s Gordon Bunshaft–designed addition was dedicated by New York State Governor Nelson A. Rockefeller and the museum was renamed the Albright-Knox Art Gallery in honor of its patron Seymour H. Knox, Jr., and his family. The Members’ Opening of the addition took place on January 20 and the museum officially opened to the public on January 21, 1962.

This long-awaited renovation addressed the museum’s need for more exhibition and storage space, and provided visitors with a resource center that included an expanded art reference library (renamed the G. Robert Strauss, Jr. Memorial Library), slide and videotape libraries, and a study center. The building reopened to the public on May 22, 1992.

In January 1998, the museum received $2 million in federal funding for the repair and rehabilitation of its buildings, including the replacement of the air-handling systems in the 1905 and 1962 buildings. After completion, the museum was equipped with state-of-the-art heating, air-conditioning, and humidity controls that met strict federal guidelines and complied with recognized museum standards for conservation.

In 2001, the Albright-Knox embarked on a period of planning for growth, with its Strategic Plan calling for “a major architectural project on the museum’s campus.” In 2005, the museum produced the 21st Century Space Study, which identified options for greater visibility of the collection and included a possible addition, and the 2006 Vision for Growth further explored these possibilities. In 2008, the BFAA Building Committee developed a Campus Master Plan, a Land-Use History, and a Museum Operating Financial Model to assist in the hiring of an architectural firm to design a new addition. In 2010, Gluckman Mayner Architects developed a Master Plan for Growth that addressed space needs and options for expansion. In 2012–13, the architectural firm Snøhetta produced a Master Plan for Growth that included three possible general approaches for the future, all of which point to a pressing need for spatial and programmatic convergence.

The Albright-Knox launched its current campus development and expansion project during the Annual Meeting of the membership on October 1, 2014. From October 2014 to January 2015, the museum held a series of outreach sessions to ask AK Members and the public to share their ideas about the future of the museum. On March 2, 2016, the museum announced its intention to select an architectural design partner for an expansion at its Elmwood Avenue campus.

After an extensive review of proposals from dozens of world-class architects, the museum selected the award-winning architectural firm OMA to expand and refurbish its historic campus. The project is OMA’s first art museum in the United States. Shohei Shigematsu, Partner at OMA North America, partnered with staff and the community to develop a vision for a renewed and revitalized museum.

The museum's Board of Directors approves expansion schematic design and building footprint, including more than 25,000 square feet of new gallery space and a reimagined education wing. Learn More about the New Campus