The Albright-Knox enjoys a long and distinguished tradition of collecting photography and photo-based artworks, from some of the earliest objects that entered the collection—a series of photographic portraits by David Octavius Hill—to more recent acquisitions by contemporary artists such as Robert Calafiore, Justine Kurland, and Alec Soth.

With nearly 600 objects among its current holdings, the museum’s photography collection can be traced as far back as 1910: a landmark year in both the history of the museum and the history of the photographic medium. It was then that the museum hosted the groundbreaking International Exhibition of Pictorial Photography (November 3–December 1, 1910)—the first show organized by an American museum that aimed to elevate photography’s stature from a purely scientific pursuit to a visual form of artistic expression.

The Albright-Knox is proud to preserve this important moment in our collective memory, one that is carefully documented within the museum’s Archives Collection. Highlights from the archival files include an exchange of correspondence between the acclaimed American photographer Alfred Stieglitz, who was invited to serve as guest curator, and the museum’s director at the time, Cornelia Bentley Sage Quinton, who, through the encouragement of her friend, the photographer Alvin Langdon Coburn, enthusiastically supported this major international exhibition. Stieglitz was a compelling advocate of the Photo-Secessionist and Pictorialist photography movements in the United States and promoted them vigorously in Camera Work, the influential journal that he founded and edited. Camera Work also served as a platform for discussions on the theoretical, technical, and aesthetic aspects of modern photography.

According to the accompanying catalogue, the central aim of the International Exhibition of Pictorial Photography was “to sum up the development and progress of photography as a means of pictorial expression.” The exhibition was divided into two parts: an Invitation Section—consisting “largely of the work of photographers of international reputation, American and foreign, whose work has been the chief factor in bringing photography to the position to which it has now attained;” and an Open Section in order “to give all American photographers an opportunity of being represented . . . [if] proved to be of a sufficiently high standard to link it with the spirit and quality of the Invitation Section.”

The exhibition was brilliantly installed by the painter Max Weber, who transformed “the most beautiful gallery in America,” as Stieglitz once described the museum, into an intimate space for the viewing and understanding of contemporary photography. In total, Stieglitz’s “Buffalo Show” introduced the museum’s audience to more than six hundred photographs by sixty-five artists. The museum ultimately acquired (through purchase or gift) many of the most notable photographic works from the exhibition, including James Craig Annan’s Lombardy Ploughing Team, 1894; Heinrich Kühn’s Still Life, 1908; Edward Jean Steichen’s Nocturne-Orangerie Staircase, Versailles, ca. 1910; Alfred Stieglitz’s The Street, Fifth Avenue, 1896; and Clarence Hudson White’s The Chiffonier, 1904. 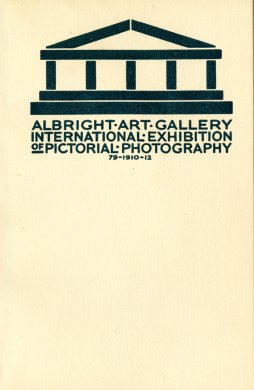