Archivist Gabrielle Carlo has been with the Buffalo AKG Art Museum for seven years, documenting and processing the extensive archive of the museum's records—some that date back to the nineteenth century, but though a lover of history, Carlo's work also helps to point the way into the future. We spoke to her about how the museum's history is helping to inform the campus's transformation.

AKG: Let’s start with a straightforward question that I’m sure has a complicated answer: What does an archivist at an art museum do?

GC: In simple terms, an archivist preserves the institutional memory of the institution, or, in our case, the museum. I think probably the hardest aspect of archival work is appraisal, just being able to determine what holds value.

AKG: What are the kinds of things that we keep?

GC: The archives holds exhibition records from 1905 until the present—even earlier: the first exhibition in the 1860s, we have those records, as well. In those records, we keep correspondence with artists, with lenders, with the curators of those exhibitions, or, in the case of the early years, the director really played the role of curator as well.

AKG: What made you want to work for the AKG?

GC: I grew up in Buffalo just blocks away from the museum. I've been coming here since I was little. Actually, I already worked in the restaurant before returning when I was getting my bachelor's degree at Buff State.

GC: That was really interesting. It was kind of behind the scenes. The restaurant staff came to work earlier than anyone besides maintenance and security, so I got to walk through the corridors and just look at the art and be alone with it. I think that it’s great to be in a workplace where you are just surrounded by beauty.

Now as the archivist, I'm working to preserve institutional memory for the future, for the staff that comes twenty years after us, so I feel like I'm playing a part in preserving our community, too.

AKG: What insight does the archives give you that you couldn't get anywhere else?

GC: Just knowing the past. For example, I did a big project: the timeline of changes to both buildings, and I think about it whenever I walk in certain galleries, just knowing what it looked like before, the changes that took place, whether it was a building project, or renovation, or something else.

AKG: Are there moments where you are seeing the present and thinking about the past?

GC: Oh, yeah: 1916, the Exhibition of Contemporary American Sculpture held about 800 pieces of sculpture by almost 170 American artists, and sculpture was placed inside of the museum, outside, in the surrounding areas. Even on Hoyt Lake, there was a huge sculpture of the Sphinx placed on the stairs. And the sculpture court was transformed into a garden pool just to house one specific sculpture that required a pool. I was always interested in Egypt and the pyramids and the question, “How did they do this?” Looking at these images from 1916, how did they get these sculptures over here with the transportation they had access to? It’s just amazing to think about that.

AKG: What do you think of the new space? Because this will be the biggest building project that you’ve seen, and it's a new building without any memory, in a way.

AKG: How does that make you feel given what you’ve been saying?

GC: I think it's great. I think you have to keep moving forward, and these are the priorities of now, and those priorities will keep changing in the future. It's exciting.

As an archivist, you can't be too tied to the past, because you see how things change within however many years your archives holds. You see the changes throughout time.

AKG: I think people might be surprised by that. You think of an archivist, and you think of trying to preserve everything the way it was.

GC: Well, I think in terms of records. When we acquire a collection, there’s a certain order, sometimes an original order. From an archivist’s point of view, you try to keep that intact. But change, I think, is different from reflecting on an institution’s history.

AKG: Are you involved with the current building project?

GC: I’ve received requests from the Director, from staff, and even from OMA, about things as small as: “what color was the asphalt of the original roof of the 1962 building?”

AKG: What color was the asphalt of the 1962 building?

GC: Gray. It was more of a gray and changed with the improvements to the roof over time. They had to seal it and cover it.

AKG: How do you figure that out?

GC: I refer to the images in 1962 and the images of each renovation that took place, just to see how it changed, and if there was a change, and then I refer to the building files about the roof and what materials were used. I go through each renovation and build a collection on the roof. Sometimes the answers are hard to find. Older images are black and white, but we were able to tell in this case.

AKG: And the newly renovated building will have the original gray asphalt?

Another new request I just received was about the auditorium. Someone will want to know even something as small as the curtains: are those the original curtains from the 1962 building? If not, maybe they want to bring it back to what it looked like. The upholstery: I know that was updated a few times. Is that the same color from 1962? Little things like that.

An archivist is a detective in some ways. You get a request, and it’s really like a mystery to solve. Sometimes it’s not always apparent. You find a clue that leads you to something else.

AKG: I understand there is a big development to restore the original 1905 stairs?

GB: The stairway was original to the 1905 building, and it served as one of the entrance points from the west side of the building. On the east side, there’s a note [in the archives] about a little boy who had a ticker who would click every time a visitor would enter. I don't know if it was a different little boy every day. With the 1962 building, the stairs on the west side of the building were torn down and the glass box entryway was constructed.

AKG: Do you think you understand why that choice was made? Do you think it was the right thing to do at the time?

GB: It was one of [Gordon] Bunshaft’s ideas that he wanted to turn that entrance into a portico and take away the stairs. I don't know if it was ever the “right” choice, but that's what he wanted. Times change and visions change. By the time I got involved in the construction project, it was already decided to rebuild the stairway, so I gathered images of the original stairway for the timeline of changes to the building.

AKG: Is there anything else that you feel like you wanted to share with members about the archives and what you do with regard to the history of the museum?

GC: I think archivists are significant to any institution that is trying to understand their past in order to move forward in the future. And I'm happy to be a part of that.

While the archives are currently closed for visitors, learn more about the collection here. If interested in the AKG's history, check out our campus timeline page, and discover more about the current building project here! 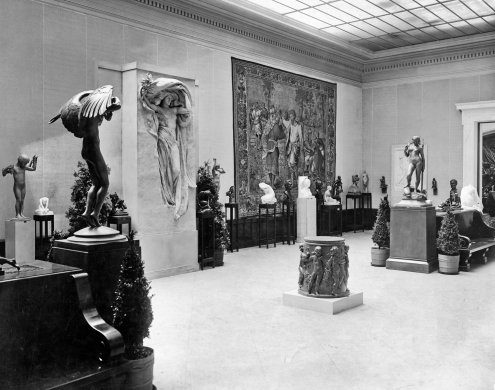 Exhibition of Contemporary American Sculpture, Held Under the Auspices of the National Sculpture Society