"How Do We Find Freedom?" The BLACKMAU Interview, Part 2

BLACKMAU is an artistic collaboration with deep ties to Buffalo. In addition to being featured in the recent special exhibition In These Truths at Albright-Knox Northland, Kamau Grantham grew up in Buffalo, where the Albright-Knox loomed large on the cultural landscape, and in 2014 while pursuing an MFA at the University at Buffalo, Stacey Robinson took over one of the galleries to read his manifesto "Where is the Black art?" In Part 1 of this interview, we spoke to Grantham and Robinson about the goals of their collaboration; in Part II, we ask them about art and Black mental health and the role that institutions like the Albright-Knox can play in promoting a future in which Black art and Black people live and thrive.

AK: Do you feel like there's any tension between art and music as a form of escape from the present and the idea of getting through the present to a future that doesn’t just have Black people in it but is also free from oppression?

Stacey Robinson: The third book that's an influence for [Black Audacious Freedom Dreams] is Bettina Love’s we want to do more than survive, do more than survive (see Part 1 for the first two). I wanted to create art that spoke to that idea of Black survival being so audacious of a thought, to be so bold of a thought but also to be so surreal of an imagining that it can be intangible, right? Because when Black spaces are created for Black people, they're always commandeered and destroyed. Think about Black Wall Street, as a Black space, commandeered and destroyed. The MOVE community in Philadelphia: Black freedom space destroyed. And there are multiple others.

And the idea I thought about through art was, what does this look like as a freedom space? But also what does it look like as a space that can only exist in a Black imagination? Because that's the only place I argue that Black people can be free. It’s the first place we have to be free. You have to imagine yourself, or a plan for yourself to be free. So it has to exist first in the decolonized Black imagination, but then it also has to exist in a space that is outside of the physical realm. Because inside the physical realm, it will always be commandeered and destroyed.

AK: How do you stay in touch with a sense of freedom or escape? How do you cultivate that in order for it to be present in your work? How do you keep the freedom dream alive, personally?

Kamau Grantham: My day job is as a psychologist, so I'm here in my office at the counseling center, and a lot of my focus with students is creating space to take care of yourself. If you invest in yourself, then it helps create this… buffer or this cushion to manage all the other stuff around you. And I think that even more so for Black people, we need to have a buffer or a cushion to manage all the stuff on a daily basis, even to manage the historical trauma: there's so much going on, so I'm just very intentional about creating space for myself, and art is an expression of that for me. Doing the collages, I can unplug from the things that are going on around me. Art and music is my way of embracing my freedom, my black freedom space. That's the only thing I can control. When you were talking about that, Stacey, I was thinking about not just Black Wall Street and MOVE, but even on a smaller scale.

Working in higher education, when Black students try to be free and do stuff, it's different. Like I remember being in college anytime we tried to have an off-campus party, and the local police would just shut that down before it even started. And that was with the Black parties, but that wasn't with everybody's party. Like the cops were called on our parties all the time. So how can we have these spaces even now? How do we find freedom?

AK: Are your Dance Music Therapy (DMT) shows an attempt to create that space of freedom?

KG: Even when we started DMT, that was also the summer where people were calling the police on Black people for barbecuing in the park or just being, that was just constantly happening. How can we have this space to just exist? We're not trying to do anything fancy. I'm just trying, we're just trying to barbecue and socialize, or we're just trying to walk down the street—and constantly being assaulted at every step of the way. And so again, for me music and art is my way of being in control and creating my own vibe in my own space and being able to unplug from all of that. I also think there's something very healing about music, which is why we call it dance music therapy. Because music and dancing is therapeutic, and it's healing.

Listen to one of DJ KamauMau's sets from a recent Dance Music Therapy event:

AK: Stacey, is there anything that you want to add personally about your way to keep yourself level?

SR: Yeah, I want to normalize this. I have a therapist. I got a lot of things going on that I have hidden behind or dodged for decades, and I can't do that anymore. And in lieu of getting the therapy that I needed, I created an amazing career. My career would be considered pretty stellar. But that came at the expense of me dodging the therapy that I needed. The art became my therapy, but very limited. You can make as much art as you want to; sometimes you need to talk to somebody. I ran from this and dodged it and made a lot of really awesome artwork. One of the things I'm digging into now, is that my greatest liberator was also my greatest imprisoner, and that greatest liberator and greatest imprisoner was my own imagination.

The thing that has limited me has been my own imagination. But the thing that has gotten me to the success that I have right now and beyond the things that I've even thought to imagine, has been that very same imagination. I'm just starting to dig into this, like this is just something I realized yesterday, you know what I mean?

SR: You know, I always say “my beef with Albright-Knox,” but I mean that in the most loving way, in a particular way. Before I landed in Buffalo, I visited a few museums in New York. And this was post undergrad. There were all of these European, these white American artists that I was studying in undergrad at an HBCU ironically, and then I go to New York, and I'm looking for these artists, and I don't really see them. They had become some of my favorite artists, and I wasn't really seeing their work. But when I went to the Albright-Knox, I found all of the artists that I studied in undergrad, and you're looking at these pieces and they’re majestic and you’ve fallen in love with it. But then you quickly realize that, once again, not a whole lot of Black artists.

I was in grad school at this time, and I was older, I was pretty formed in my thinking in a way like I'm mature enough to be able to say, to challenge a system, and I took a performance class, and one of the things that we had to do was create a public performance piece, and then on my week to go once I realized the schedule, I realized that I had to present my work on a Friday so it happened to line up on with First Friday, and I wrote a manifesto called where's the black art? And it was really this love letter to the Albright-Knox that was voicing this frustration.

Watch the Robinson read the manifesto from 2014:

AKG: I would want to know from your perspectives as artists in the show, but also as people who make art and are creative, how do you tell when a museum or a gallery is doing good work versus just performing goodness or even just savvy advertising in a moment when it’s important to do that?

KG: For me it’s not just, What are they doing, but also Who's involved in the project? Are other Black people involved in the project. Who's behind the scenes? Who are the artists that they're promoting? And then, is this just a one-off? Did you do this during Black History Month to check the box? I like to see consistency. I also like to see what opportunities are being created for future Black artists? Are you doing work in the community? Are you trying to encourage new artists? How are you engaging young people to get involved? How are you helping to create institutions that will continue going forward? To me, that signifies that you really care about the art.

SR: As we're entering in the summer of 2022 what has really changed? You can qualify and quantify what has changed. Do we have these systems—not only have they hired people. That's awesome that more jobs are given to Black and Brown curators and directors. That's wonderful, but that's not the systemic change that we need in order to change our society. We need to defund the police. Not that we don't need police at all, but we need the money that's allocated to militarizing a police force in urban areas to go to creating jobs in urban areas that alleviate poverty, to creating housing in those areas.

AK: Maybe we can be a place where you can imagine what that future may be—

SR: Or you could broker those conversations, right? It can be a space that opens up the mostly white spaces of white boards of directors and boards of trustees to have these conversations that would be typically taboo in those spaces. There's a lot of people on these boards, who might not just be on the Board of the Albright-Knox, but might be on the board of trustees at UB, or Sahlen Field, or KeyBank Center. And planning, not just conversations, because we need to walk away from conversations with tangible plans that can be enforced, right?

Read Part 1 of our interview to hear more about the BLACKMAU collaboration.

Note: this interview is condensed and edited from a conversation that took place on May 6, 2022. We support the right of these artists to express their views candidly to push forward a discussion of the important issues of our time.

See more of Kamau Grantham's work as DJ KamauMau with Dance Music Therapy, a group of DJs on a mission to create a safe space for everyone to enjoy dance music with events this summer in the Champaign-Urbana, Illinois are, and listen to his work on his SoundCloud, Mixcloud, or follow him on Instagram @kamaumau. 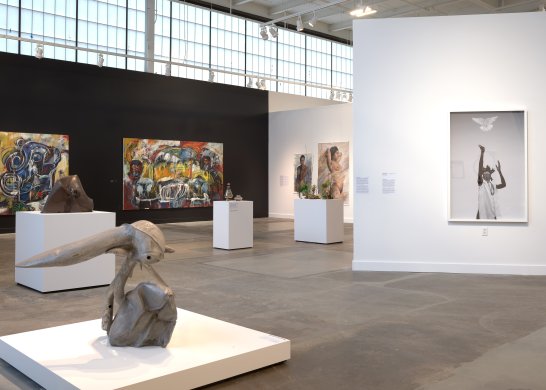 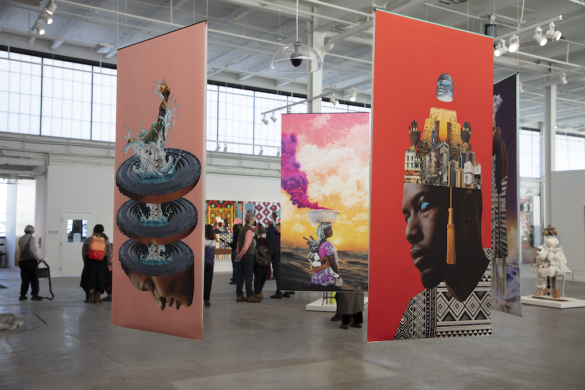 "We're So Tight You Get Our Styles Tangled": The BLACKMAU Interview, Part 1