Sun, Tower, Airplane, 1913, by Robert Delaunay, is a celebration of modern technological advancements in the early twentieth century. The painting depicts Delaunay’s enthusiasm for technological developments in the new and modern world through the use of bright colors and fragmented imagery. This lesson will introduce students to three significant technological feats of the late-nineteenth and early-twentieth centuries while encouraging them to reflect upon the technologies we experience in today’s society.

Robert Delaunay (1885–1941) was a French artist who lived during a time of growth and change in society and the art world. Without formal training in the arts, Delaunay had a successful career as an artist, experimenting with different art movements such as Pointillism, Fauvism, and Cubism early in his career. As Delaunay’s career progressed he began creating more abstract art. In 1912, Delaunay began to develop a unique style by transforming Cubism through the use of a vibrant color palette. Delaunay came to believe that light could be expressed as pure color, independent of objective content. This blend of Cubist-style geometric shapes with strong colors would become known as the Orphism art movement.

Delaunay combined fractured forms and shallow spaces of the then-new style of Cubism with his own passion for color and light in Sun, Tower, Airplane, 1913. The left half of the painting is completely abstract, consisting of swirling geometric shapes and color. The same bright colors are also found in the right side of the painting along with several recognizable semi-abstracted elements. A biplane is seen at the top center of the painting. The shapes visible below the plane are lines representing the iron work of the Eiffel Tower. On the far right is a rounded, step-like shape that is an abstracted Ferris Wheel.

All three symbols of modern technology in Sun, Tower, Airplane—the biplane, Eiffel Tower, and Ferris Wheel—were invented in Delaunay’s lifetime. All three defy gravity and extend into the brightly colored, energetic atmosphere. The sun shining throughout the painting is meant to reflect the artist’s belief that nature and technology can coexist. For further information on each of the three technologies included in this painting, refer to the Building Visual Literacy portion of this lesson plan.

Cubism: early twentieth-century art movement marked by the use of geometric shapes and multiple perspectives or viewpoints

For a fun activity to support class discussion and visual literacy, students can play detective by attempting to piece together clues about an artwork. During a discussion, students can view the different elements of the work. Studying the work, they can identify key features and assess their feelings about what they see. What other clues can be collected by looking at the title? Based on the evidence they have collected, students can draw conclusions about what the artwork represents. This detective activity can be a way to approach looking at and talking about art in groups.

Try beginning this activity by withholding the title of the artwork. Students can begin by focusing on the different elements and principles that are seen in Sun, Tower, Airplane (e.g., color, shape, value, space, movement, etc.). Have students describe the feelings they experience when observing this painting. Once they have investigated the elements of the artwork, the student art detectives can begin examining the imagery.

Explain to students that during the late-nineteenth and early-twentieth centuries, the images seen in the painting were inventions that were considered technological advances. Many inventions during that period are still used today. Ask your student art detectives to locate the following images:

Breaking down the different layers of meaning in an artwork allows students to build abstract thoughts based on concrete observations. It is an interactive way to teach visual literacy in your classroom. Once students have discussed the inventions from history, ask students to brainstorm the different technological advances in today’s society. This discussion can segue into the artmaking activity.

To begin the artmaking lesson, ask students to brainstorm new and exciting technological advancements in our world. Objects such as smartphones, social networking platforms like Facebook and Twitter, and the Internet have transformed the way people communicate with one another or receive news updates. Jet planes, 3D movies, and video games are also modern technologies that we may experience and use daily. Like people in the early 1900s, these modern technologies are celebrated and can one day affect people of the future.

Students will create an artwork celebrating the modern technologies we have today. Encourage students to think of this project as a time capsule or a visual diary of current events— maybe, in one hundred years, people will be able to view their artwork and see a depiction of their society and technologies.

Have students draw their technologies onto a piece of paper. They can be realistic drawings or semi-abstracted objects as seen in Robert Delaunay’s Sun, Tower, Airplane. For the spaces surrounding their drawings, students can create interlocking geometric shapes. Coloring materials can be modified depending on the grade level or educator preference. This lesson can also be adapted to become a collage or painting project. 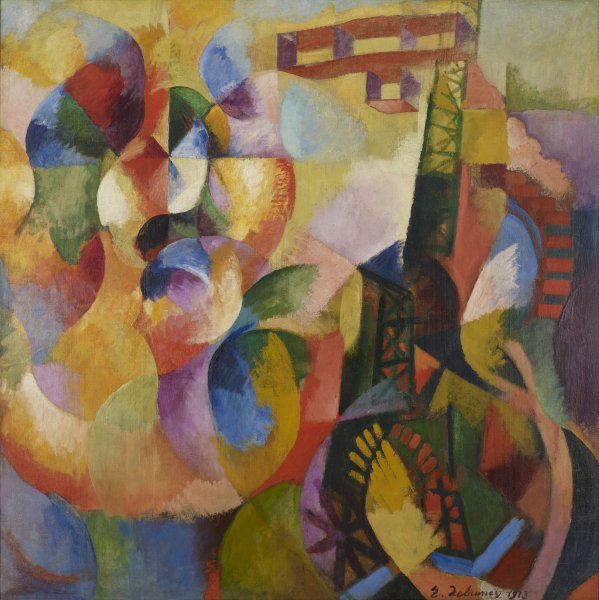