Known for his narrative collage work, Romare Bearden created scenes that reflect traditional stories and contemporary life. The themes in Bearden’s works are often relatable, containing modern commentary on well-known parables. For example, Bearden reimagined the parable of the Prodigal Son in his 1967 collage Return of the Prodigal Son. In this lesson, students will study both the ancient parable of the Prodigal Son and Bearden’s more modern collage, exploring the similarities, differences, and themes of the two works. Inspired by the story’s tone, students will create collages that reflect family memories of their own in the style of Romare Bearden.

Romare Bearden was born in North Carolina in 1911. He moved with his family to New York at a young age and grew up during the peak years of the Harlem Renaissance. After graduating from New York University in 1935, Bearden became a social worker with the New York City Department of Social Services, finding time to work on his art at night and on the weekends. Having experimented with many different mediums and styles, Bearden is best known for his richly textured collages. Popular subjects in Bearden’s art often relate to his life experiences, including African-American traditions, stories from religion, and jazz music.

Bearden’s collage work Return of the Prodigal Son, 1967, contains three figures in an indoor setting. On the left, the returning son is in a frontal position with his arm around the neck of the central figure. In the center you can find the profile of a pearl necklace–clad woman facing the son while appearing to be seated at a table. A candle, knife and fork, and salt or pepper shakers can be seen on the table. In front of the table stands a figure, also facing the son, who has characteristics that could either be male or female. In the scene behind the figures is a picture of bottles and jars that might be intended to reference food. To the far upper left there is either a view out of the window or a work of art depicting a desert scene. Toward the lower left of the collage, a bottle of wine wrapped in rope is depicted.

In this artwork, Bearden has updated the story of the Prodigal Son, which, in turn, reflects aspects of his life. The artist stated, “The Prodigal Son has left North Carolina, gotten into bad company, and has come back to the ‘old folks,’ his home, where, as Robert Frost says, when no one else wants you, they got to take you in.” This collage references both traditional and modern versions of the story. The returning son, on the left, is greeted by his family. The candle refers to the proverbial candle in the window, left burning for returning friends and family members. Utensils, a salt shaker, and a bottle of wine reflect the feasts that would be served to celebrate the son’s homecoming.

narrative: a story that is told or written

collage: artwork comprised of various materials such as photographs pasted over a surface

overlapping: the process of laying one object on top of another

texture: an element of art—visual or tactile surface quality of an object

Romare Bearden’s collage can be discussed in two different ways: one relating to the ancient parable about the prodigal son, and the other based on Bearden’s life as an interpretation of the parable based on contemporary society. Presenting your class with two versions of the story, set in different times and places and involving different sets of characters, illustrates how artists can find inspiration to create art based both on literature and daily life.

The first part of the discussion should take place prior to showing your students Bearden’s collage. This discussion relates to the parable of the Prodigal Son. Read the following narrative. When finished, ask students to summarize the story, focusing on the characters, setting, and events. The story can be relayed as follows: “Once, many years ago, somewhere in the Middle East, lived a wealthy man with two sons. Each of them was given a share of his father’s money and possessions. The oldest son stayed home and worked hard, helping his father with their animals and crops. The younger son left home and traveled all over, spending his money wisely. After a number of years, he found himself penniless and homeless. He returned home to his father, apologizing for his careless behavior. Rather than punishing the irresponsible youth, his father hugged him, gave him new clothing, and had a great feast prepared to welcome his son home. The older son thought that this was unfair and was angry. Although his father understood his anger, he explained, ‘Your brother was dead and has come back to life, was lost and is found.’”

After your discussion of the Prodigal Son parable, show your students Bearden’s collage. Ask them to look closely at the work and the different elements of the collage. Making a list and sharing their observations with the class can guide discussion on the work’s meaning. Inform students about title of the work, Return of the Prodigal Son, and how Bearden was inspired by the parable. Share the following quote from Bearden about the artwork: “The Prodigal Son has left North Carolina, gotten into bad company, and has come back to the ‘old folks,’ his home, where, as Robert Frost says, when no one else wants you, they got to take you in.” Ask students similar questions about the artwork’s characters, setting, and events, including what the different elements of the collage represent, in order to support their answers.

To connect the discussion to the artmaking activity, ask students to think about their own families, friends, or childhood memories. Is there one distinct setting that comes to mind? Who are the characters or subjects in this memory? What is the event? What elements or objects are present in that memory? Have students write down their responses and brainstorm the different visuals that come to mind when they reflect on their memories. Instruct students to bring in old photographs or copies of family pictures and collage materials for their artworks.

Have students lightly draw the key shapes, scenes, and characters of their selected memories on pieces of scrap paper. This will help them visualize what they want their compositions to look like. Then, students should begin cutting and pasting the background shapes onto their collages to build the scenes of their images. Laying out larger areas of collage paper can help reduce clutter later in the collage process. Remind students to evenly distribute their glue on collage materials to aid in the craftsmanship of their artworks. Encourage them to use different textured papers and images to create unique collages.

Once their backgrounds are finished, students can begin adding characters and props into their collages. During this part of the artmaking activity, it is helpful to readdress the subjects in Romare Bearden’s work. Focus the discussion on the artist’s ability to capture the essence of a person using minimal features such as a large eye or a red snippet of paper to represent lips. Also discuss Bearden’s use of facial side profiles versus frontal perspective for his subjects. Support students in taking risks in their artworks! 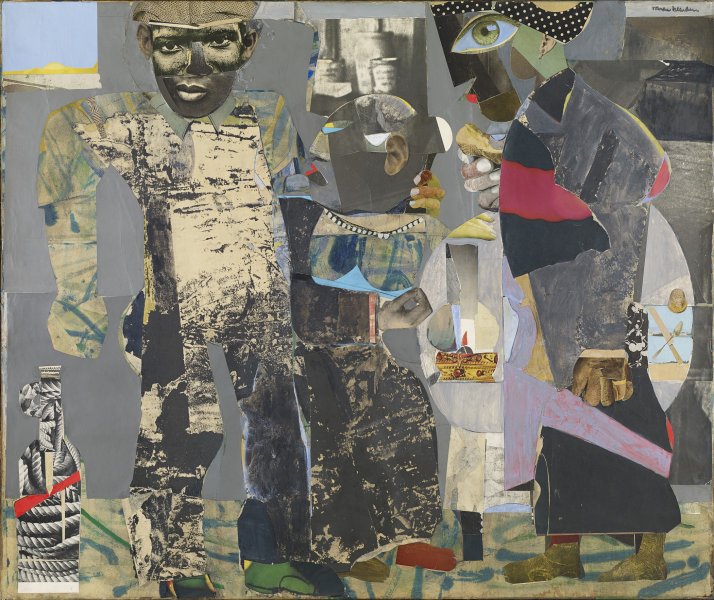