Artist Chuck Close creates large-scale portraits in a unique way. Through the use of a grid system, Close creates paintings that are composed of many squares. Like an illusion, when viewing one of these paintings close up, one sees an array of squares filled with abstract shapes and colors. Upon further observation, and when viewed from a distance, a portrait appears that is formed by these separate square compositions. Close’s mathematical approach to structuring his work, combined with his abstract flair, results in energetic portraits. This lesson—which is inspired by the different elements of Close’s portraits—reinforces the elements of shape, color, and value in creating unique self-portraits.

Chuck Close was born in 1940 in Washington. After earning his BA from the University of Washington in Seattle in 1962, Close attended Yale University. During his time at Yale, Close was exposed to a contemporary curriculum that inspired his artwork. With his MFA completed in 1964, Close began experimenting with different styles of painting drawn from his studies of contemporary art. Inspired by portraiture, Close began creating large black-and-white photo-based portraits in the style of Photorealism. Photorealistic paintings resemble photography in their close attention to detail. The subjects of these large portraits were mostly Close’s family members, friends, and fellow artists.

Over the next few years, Close’s work continued to evolve and, while still painting portraits, he also began transferring images onto canvas using a grid system, copying grid segments from images into corresponding cubes in his paintings. Close started to break away from Photorealism through the act of physically incorporating the grid layout into his paintings. There is an illusion present in Close’s portraits. When inspected closely, a grid of squares is visible, each containing various colors and abstract shapes and forms; yet, when viewed from a distance, the squares morph into a clearly defined portrait.

In 1988, Close was diagnosed with an artery collapse, which he refers to as “The Event.” As a result of his condition, Close suffered complete paralysis from below the neck. During his rehabilitation process, Close was encouraged by his wife to try painting again. With limited movement in his arms, Close was able to paint using a paintbrush-holding device that was strapped to his forearm and wrist. With the creation of a remote-controlled easel and help from studio assistants, Close continued using a grid system to create his portraits. Close began seeing each grid as a tiny painting within itself. The inspiration derived from this new painting process has resulted in Close’s portraits becoming more abstract and colorful.

Janet, 1992, is a portrait of painter Janet Fish, a friend of Close’s from Yale University. Fish remembered arriving at Close’s studio without high hopes for the completed painting, preparing for a “not so wonderful” image. In the end, she was very pleased, saying he had captured “sparkle that I liked, a jump, and the way things moved very fast.” Close said he was interested in creating “with the strong darks and lights, this kind of sparkly, almost liquid effect.”

The process began with a photograph, which was enlarged to the size of the canvas. An identical grid was drawn on both the image and the canvas. Starting in the upper-left corner, Close completed the grid one row at a time. Each square is an individual abstract composition made up of different shapes. Like an illusion, when standing close to the painting, it is hard to discern Janet. The farther back you move, the clearer she becomes.

value: the lightness or darkness of a color

Photorealism: an art movement of paintings which resemble photography in their close attention to detail

Creating interdisciplinary ties between art and mathematics is achievable in this lesson. The creation of a grid involves measuring and creating ratios to change the scale or size of a grid. The use of rulers as a tool to create a grid, as well as multiplication or division to size up or down a grid, are different elements used in this lesson.

During the introduction to this lesson, while looking at examples of Close and his artwork, you could have a mathematical discussion on the grid created in the painting Janet. While viewing the artwork, you can ask the following questions:

For younger students who may not have had much experience using rulers, they can measure different objects around the classroom. Older students can benefit from creating grids with a 1:2 or 2:1 ratio as practice for their artmaking project.

Begin the artmaking activity by taking and printing portrait pictures of each student. The images should be full page. Demonstrate how to use a ruler to create straight lines on paper. Create a grid across the portrait image. Grid size will depend on age level. For younger grade students, each grid box should be one inch by one inch in size. Middle grade students will create a grid on a separate piece of drawing paper with one inch by one inch–sized boxes. Make sure the grid lines are done lightly. Forolder grade students, smaller grid sizes will result in a larger drawn image, depending on the desired scale.

For younger grade students, demonstrate how to use oil pastels. Emphasize the ability to blend colors using oil pastels. Using one color, trace the pencil grid across the portrait. Following the shapes on the face in the box, trace the key features using the same color oil pastel. Instruct students to color over their faces one box at a time. Encourage students to follow the shapes and angles in the boxes with their pastels. Try using only two to three colors per box. Moving from top to bottom will help reduce smudging. Once students have finished, they will be left with an oil pastel grid portrait.

For middle grade students, use a black permanent marker to trace key elements in the portrait, including facial features and shapes, hair lines, and basic clothing outlines. Place the portrait sheet behind the grid drawing paper. Using a light box, trace the marker lines onto the grid, transferring the portrait onto the grid. Students will fill in their portraits using colored pencils, one box at a time. You can encourage students to use abstract colors in their portraits. Using only two colors for their background, instruct students to create one shape in each box that fills their background. Using one color, trace the grid lines that create the background. With that same color, fill in each newly drawn shape. Fill in the remaining areas of the background with the other color. Choosing two different colors, follow the same process for the skin in the portrait (create shapes in the skin, coloring the shapes one color and the skin the other color). Repeat this step with different colors for the hair and the clothes in the portrait until the grid is saturated with color.

For older grade students, transfer their grid portraits onto canvas. The grid scale will depend on the size of the canvas. To transfer a grid onto a canvas, create a grid on the portrait image. With a smaller grid on the image and a larger grid on the canvas, the drawn image will appear much larger. Once you have determined the desired size of the grid, ask students to begin transferring their portraits onto the canvas, working one square at a time. Students should focus on re-creating the lines and shapes in each square to create an overall larger replicated image. With the image duplicated, students can begin filling in their grid portraits with paint. Have students focus on the shapes they see in each square of their face. Working one square at a time, create abstract shapes that relate to the images in their portraits. Encourage students to try using a similar color palate throughout their grid to create unity in their overall artwork. Reference Close’s paintings to emphasize his use of creating joined squares in the face as well as his ability to achieve unity. When students are finished, they can define their facial features if they choose. 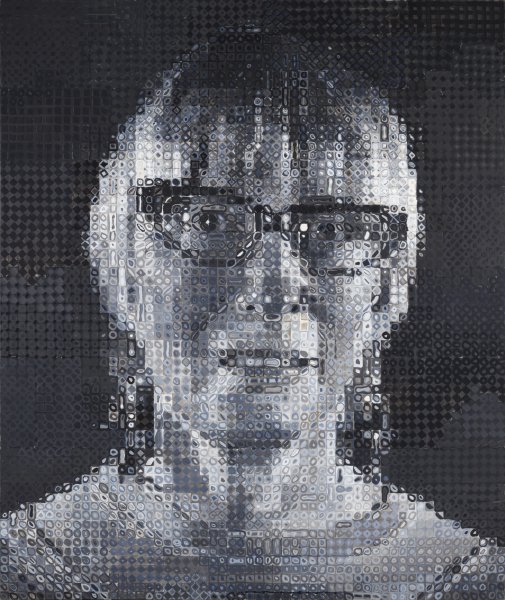