Best known for his monumental textured paintings, German artist Anselm Kiefer’s encrusted surfaces of thick impasto confront themes of memory, history, identity, and culture. Through texture, Kiefer’s landscape paintings portray rough emotions and symbols with meaning to the artist. In this lesson, students will explore the principles of texture and landscape while reflecting on the personal significance landscapes may have on different people’s lives. 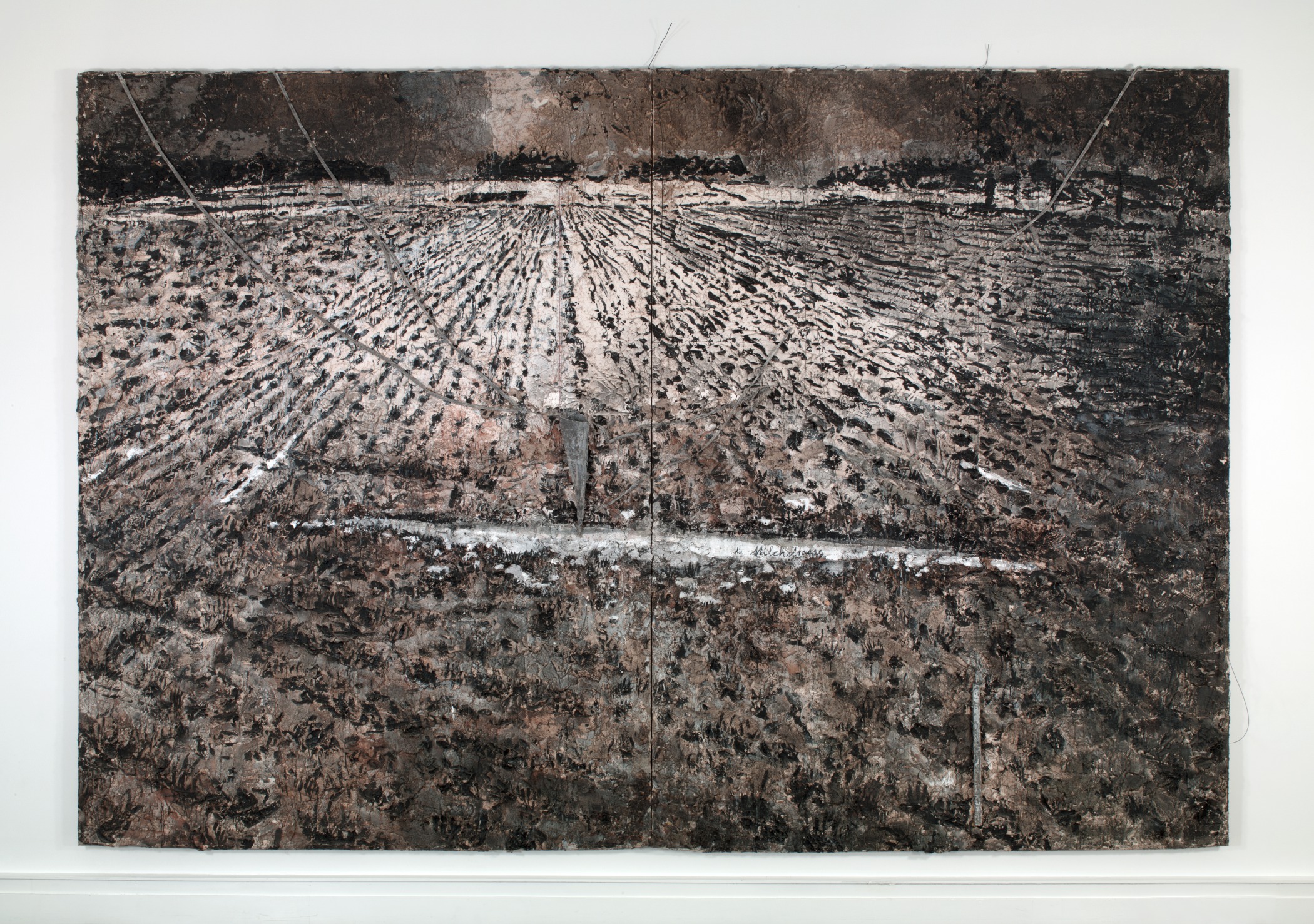 Born in 1945 in Germany at the end of World War II, Anselm Kiefer grew up in the post-war landscape. After studying law, Kiefer began pursuing the arts in the late 1960s. Kiefer often symbolically refers to his culture and identity as a German living after World War II. Landscapes, like many of Kiefer’s work, serve as a vehicle to address larger themes such as memory, identity, knowledge, and spirituality.

Kiefer’s work often has multiple layers of meaning. In this landscape, the vibrant flowers in the field are more than simply flowers—they also serve as a symbol of a dark moment in history referenced in the title of the work. Conceived by former U.S. Secretary of the Treasury Henry Morgenthau, Jr., in 1944 as an action plan for Germany after World War II, the Morgenthau Plan called for the total de-industrialization of Germany and a return to an agricultural nation. Had this plan been implemented, it is believed it would have led to the death of more than ten million Germans. The Marshall Plan, which was adopted, gave Germany aid to rebuild and maintain their industrial economy.

Kiefer saturates this work with a second layer of meaning by titling this work der Morgenthau Plan: the field of flowers references both the flowers that would have grown in the agrarian Germany brought about by the plan, and the darker side of human nature.

Die Milchstrasse (The Milky Way), 1985–87: Embodying the feeling of despair or loss upon viewing a seemingly barren and desolate field, this landscape could be based on what the artist saw around him during his childhood in western Germany. Kiefer incorporates many objects into the work and adhered to the canvas. A lead funnel can be seen hanging in the middle of the canvas. The funnel is intended to refer to the medieval practice of alchemy by which it was believed that lead could be transformed into gold. This idea of something simple changed into something extraordinary reminds the viewer of the possibility of transformation.

The funnel leads into a white gash near the center of the painting that also includes the title, die Milchstrasse, or “the Milky Way.” The white gash brings lightness to the painting as a glow seems to spread out across the barren landscape from the funnel, anchored in this white gash. Upon closer viewing, one can see that the landscape is not completely desolate: there is hope represented through some light spreading across the center of the field.

texture: physical feel of a touchable sensation on a surface area

implied texture: appearance of a touchable sensation on a surface area

The Morgenthau Plan: post-World War II plan that proposed the deindustrialization of Germany

landscape: picture of a natural scene of land

For a fun activity to support class discussion and visual literacy, students can piece together clues about an artwork like a detective. During a discussion, students can view the different elements of the work. Studying the work, they can identify key features and assess their feelings about what they see. Ask students to consider what other clues can be collected by looking at the title. Based on the evidence they have collected, students can draw conclusions about what the artwork represents. With students working in groups, this detective activity can be a way to approach looking at and talking about art. When viewing der Morgenthau Plan and die Milchstrasse, ask students to describe what they see. Do they look like places they have been before? Ask students to describe any elements or principles of art that they may observe, including color, line, movement, and texture. Can students describe the textures that they see with adjectives?

To create der Morgenthau Plan, Anselm Kiefer photographed fields of wildflowers outside of his studio. He printed one photograph on large sheets of paper, fitting the sheets over the canvas. Kiefer then painted directly on top of the photograph. He also used different materials, adding them into his painting. Some materials included ash, straw, and even glass. Explain Kiefer’s artmaking process to your students.

For a deeper discussion about the artwork for middle and older students, create an interdisciplinary connection to Social Studies through the discussion about World War II and German culture during that time. Explain to students that Kiefer, as a child, grew up in a country that was still damaged from war. During World War II, aerial strikes heavily damaged the landscape, buildings, roadways, and railways in Germany. After the war, the Morgenthau Plan was proposed, which would have deindustrialized Germany, reverting it to an agricultural nation, in turn leading to the death of millions of Germans. Ask students why the floral landscape might have the title der Morgenthau Plan. Can students identify different feelings the artist may have felt about the proposed plan? Have students brainstorm different landscapes that they may have seen. Compare and contrast the landscapes that Kiefer may have experienced as a child and their personal experiences with landscape.

Breaking down the different layers of meaning in an artwork allows students to build abstract thoughts based on concrete observations. It is an interactive way to teach visual literacy in your classroom.

In this hands-on activity, students will experience implied and actual texture using the senses of touch and sight. Introduce students to actual texture through the sense of touch. Bring in flowers for students to handle and touch. If weather permits, students can find flowers outside. Ask students to use adjectives to describe the texture (soft, fuzzy, smooth, etc.); it is helpful to write these words down. You can also discuss the different parts of flowers with your students. Explain to students that when they touch an object, they are feeling the object’s actual texture.

To discover implied texture, show students paintings of flowers such as Henri Rousseau’s Flowers in a Vase, 1909, in the collection of the Albright-Knox. While looking at the paintings, ask students to describe how the flowers would feel. Again, ask students to use descriptive words to describe the texture that they see. Explain to students that when they are viewing the flowers in the paintings, the artists created the flowers to look like they have texture, while the surface itself is smooth. This is called implied texture.

Before the artmaking activity, introduce students to a computer drawing program such as Microsoft Paint. This can be done in collaboration with a technology teacher or during your own classroom time. It can be helpful to introduce the different tools and applications of the program prior to this lesson. Demonstrate how students can open and save the program, undo any errors they may create, and how to choose different paint colors. Once students have a general knowledge of the program you will be using, students can begin working on their final artwork.

To begin the artmaking activity, students will select a landscape as the base of their artwork. The landscape image should be a large-sized image. This can be found via an Internet search engine. It is helpful to search for backgrounds or desktop wallpaper images of landscapes to acquire a large-sized image. Students may need assistance uploading the image to a computer drawing program. With the image uploaded, students can begin using different tools on the program to draw directly over the elements of their landscape scene. Encourage students to mimic the lines or shapes that appear in their landscape.

When finished, print out both the original image and the new, re-created landscape. These can be hung together to show the inspiration behind the implied texture artwork. In a wrap-up activity, students can compare and contrast both images while identifying the textures created.

To begin the artmaking activity, instruct students to find an image of a landscape that would fit a canvas board or thick painting surface. Once students have a printed image of their landscape, use a glue stick to glue the image to a canvas. Remind students that Kiefer’s artmaking process is similar to this lesson, but on a much larger scale. If matte medium is available, apply one coat of the medium over the painting. Allow for it to dry. This step will help reinforce the paper on the image.

Older students will use a meaningful photograph of a landscape for their painting. The photograph can be an actual image taken by the student of a real landscape or of an image that reminds students of a personal experience. Once students have their image, follow the steps outlined in the middle grade artmaking activity to create a textured landscape. 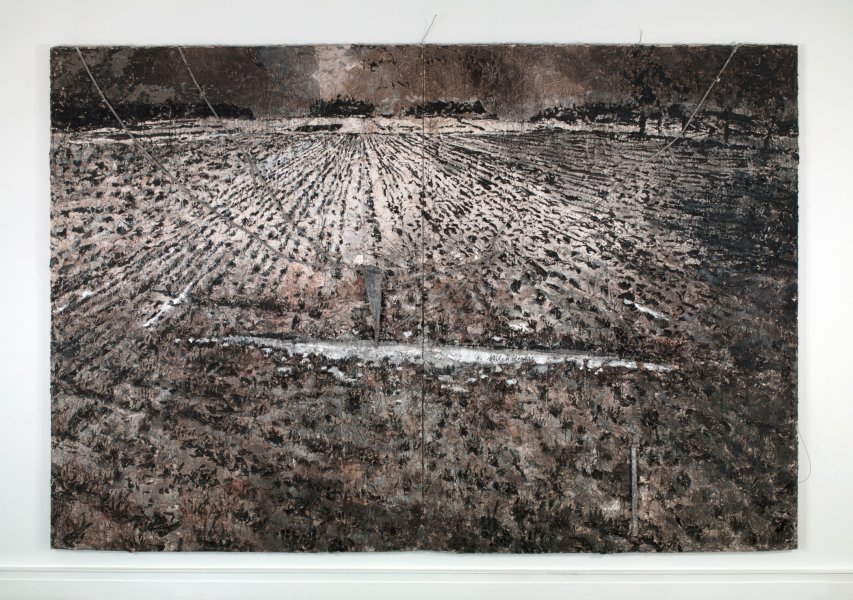 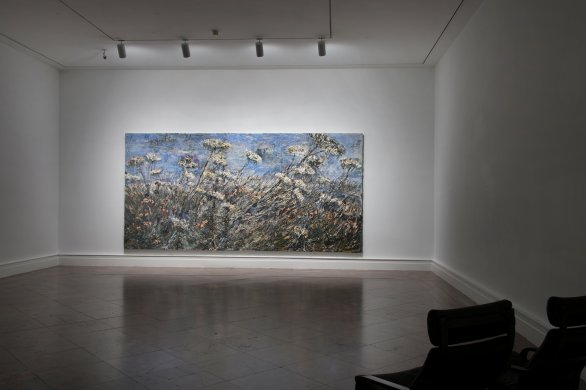 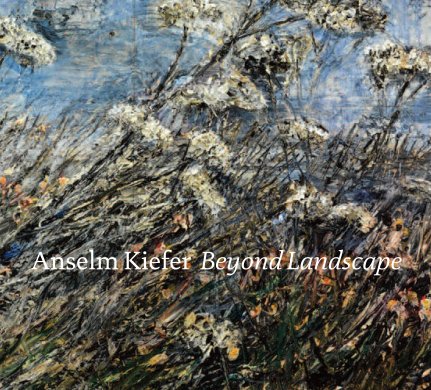